Reykjavik, the capital of Iceland, is a thriving, colorful metropolis, with a glorious, rising skyline

A vibrant and dynamic metropolis, Reykjavík city is the hub for many amazing things. It hosts numerous impressive art museums, many avant-garde art galleries, various charming streets, and myriad fusion cuisine, with countless adventures and excursions starting from here. The capital of Iceland is a great place to explore and see the exciting side of the island nation.

Where is Reykjavik?
How Do You Pronounce Reykjavik?
When is the Best Time to Visit Reykjavik?
Things To Do in Reykjavik
Reykjavik Quick Facts 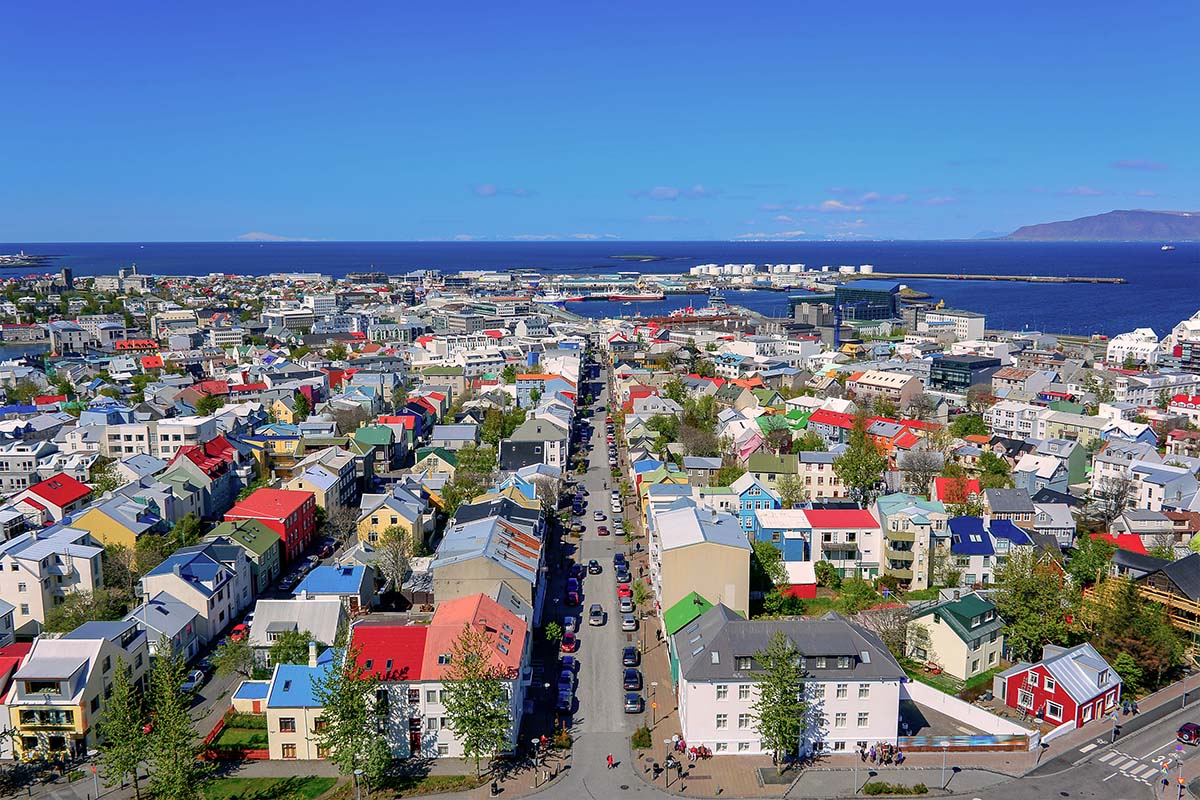 The colorful houses in downtown Reykjavik, a view from Hallgrimskirkja Church towner.

Reykjavik is the capital of Iceland, a Nordic country located in the North Atlantic Ocean midway between North America and Europe. As a harbor city, Reykjavik is on the southeast coast of the island and facing north from Faxaflói bay.

The biggest advantage of the city’s location is that it allows for many opportunities for sea trips. Starting from the famous Old Harbor, also called  Reykjavik Harbor,  many sea based attractions are available for whale watching, and Northern Lights hunting.

Reykjavik is also a wonderful spot to see the wonderful birdlife like the puffins, with tours leaving the harbor on board the Puffin Express. 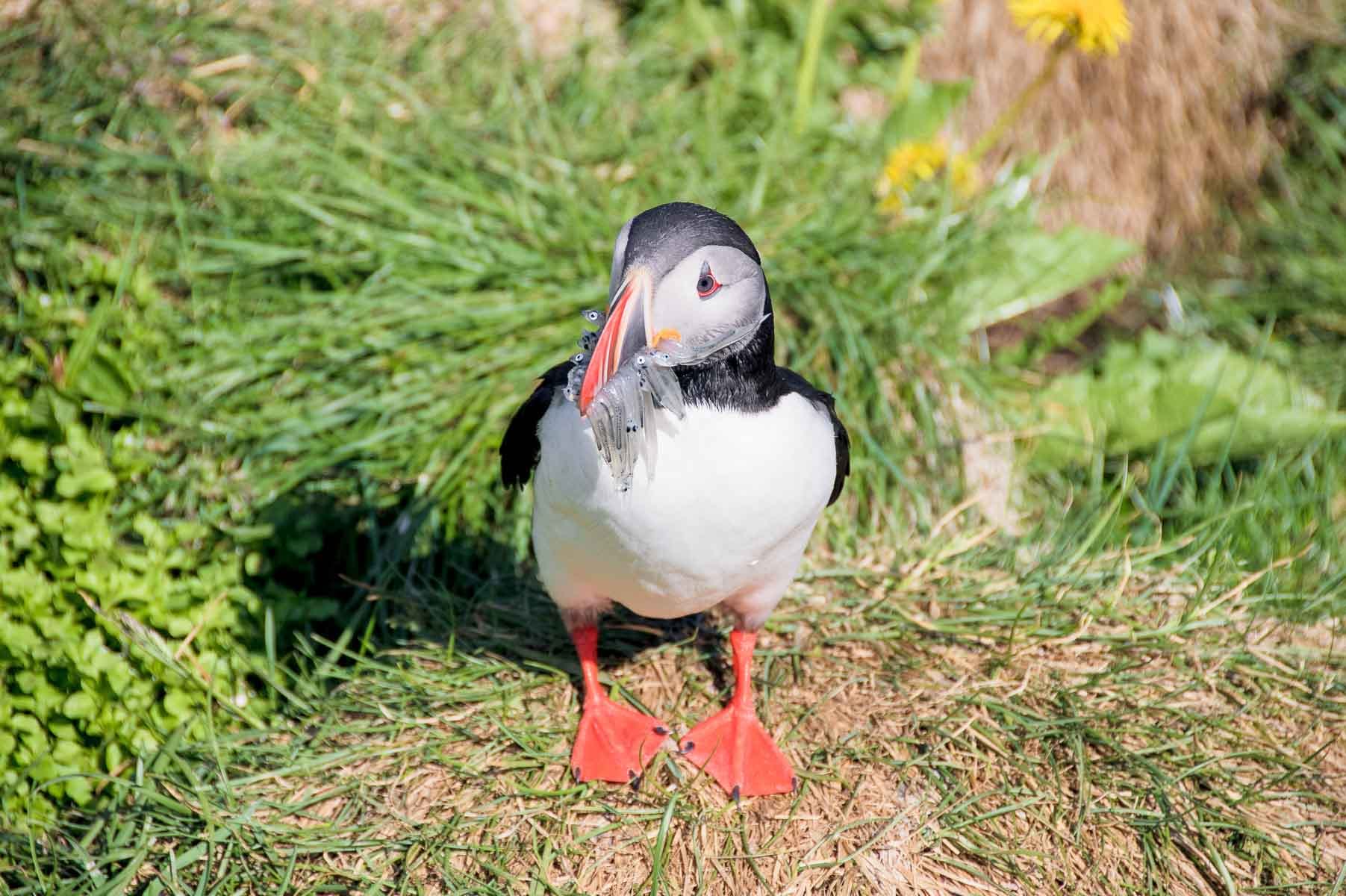 A Puffin bird with fresh food from the sea, Summer, Iceland. ©️Yanshu Li

How Do You Pronounce Reykjavik?

Rarely a city’s name sounds so lilting and melodic as the pronunciation of Reykjavik does, like a pleasant rhythm dancing on the tip of the tongue. To pronounce Reykjavik  like an Icelander, you can slow down the rhythm, and separate the syllables as “rey - kay - ya - vik” or “rey - kya - vik.” It’s all about the rhythm.

Like many Icelandic words, Reykjavik is a combination of different words, used together to make a new word. Reykjavik translates into “reykja,” meaning “smoke,” referring to the steam coming from the ground. And “vík” means  “a small bay or an inlet.” So the capital’s name means “a smoky bay.” 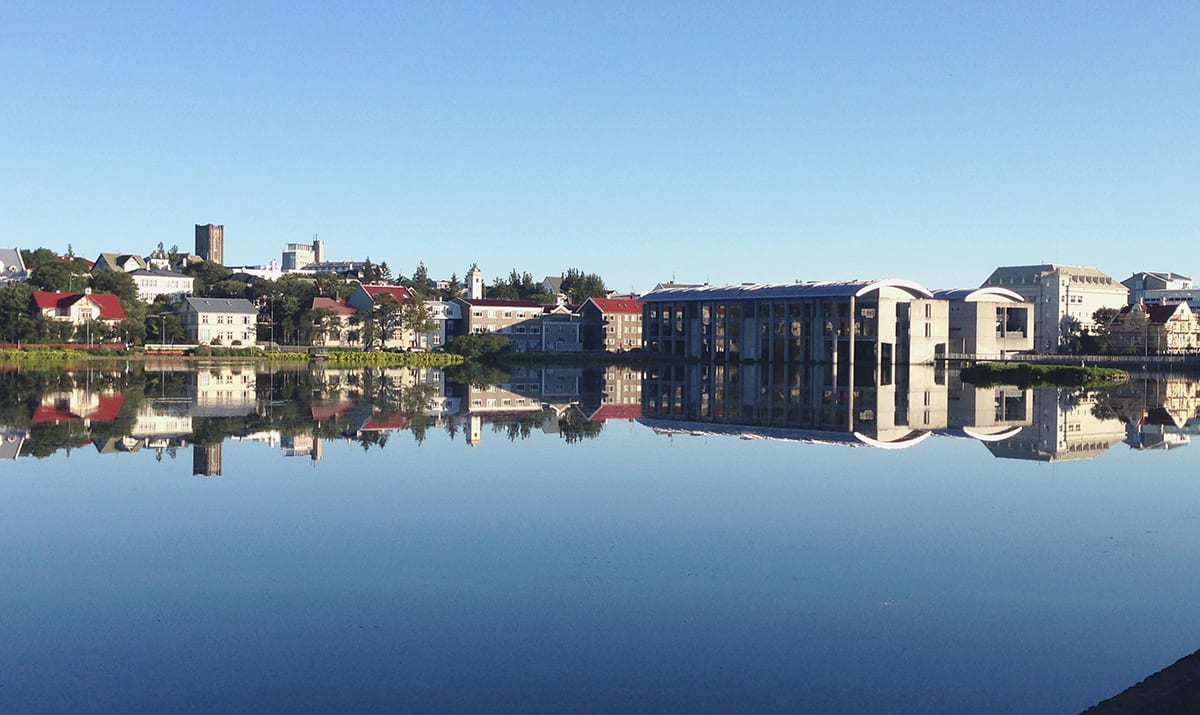 The surrounding view of Reykjavik city hall and the Tjorn lake in downtown Reykjavik.

When is the Best Time to Visit Reykjavik?

We want to say ‘all year round’, but we know you need more helpful details, so let’s go through the pros and cons of visiting Reykjavik and Iceland at different times of the year.

Summer, or the high season, as we call it, lasts from June to August. The daylight hours are much longer, the weather is pleasantly warm, and the scenery is picturesque, the wildlife vivid.

Over the summer, Reykjavik has a lot of public events and celebrations, such as the Seaman’s Holiday, Icelandic National Day, Reykjavik Pride, Reykjavik Culture Night, and Secret Solstice Music Festival.

The Midnight-Sun is another natural spectacle, and the most popular spot in Reykjavik to see the glorious scene is beside the Sun Voyager, Solfar sculpture. 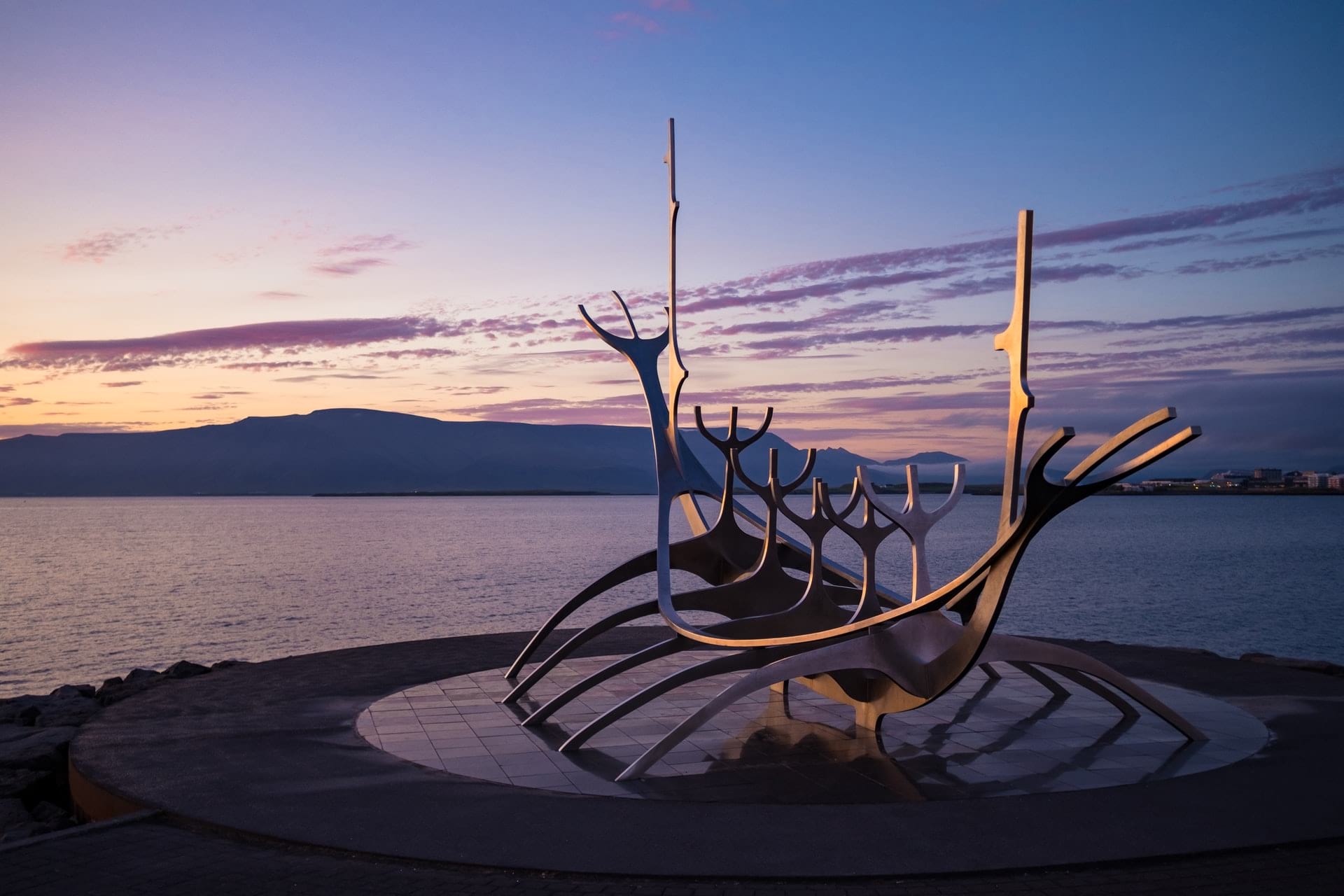 Reykjavik's Sun Voyager sculpture in the glow of the Midnight Sun. ©️Yanshu Li

If you want to immerse yourself in the local community, spending time in the geothermal swimming pools is your best option. We recommend purchasing a Reykjavik City Card to get access to swimming pools, museums and galleries, the botanical garden and more!

Now with an active erupting volcano close to the capital, you can hop on the active volcano evening tour from Reykjavik to see the hot lava under the midnight sky.

The colorful Landmannalaugar highlands is also open in summer to visitors with 4X4 vehicles, Or an alternative suggestion would be to drive around Iceland for a Ring Road trip.

Cons: The Northern Lights are not visible. The crystal ice caves are not yet accessible for visitors. The cost of stay can be higher as there’s more demand.

Iceland in the wintertime ranges from November to March, and has become increasingly  popular over the past few years. During snowy, stormy weather, multiple indoor adventures are available, but Reykjavik’s winter can be even more delightful if you make the best of your itinerary.

The Northern Lights are the highlight for many visitors. The splendid natural phenomenon is best observed from September to March, when  Iceland is the only country in the world where the Northern Lights can be seen anywhere within the entire island.

Sign up for a Northern Lights Hunting experience for the amazing green bliss in the sky.

Granted, it can be a bit harder to see the aurora borealis in central Reykjavík,due to its light pollution, but you can sign up for a Northern Lights Hunt, where an experienced guide will take you to the best possible spot to see the breathtaking show. Please keep in mind that the KP index is the best indicator to the light coverage you might see.

Another mesmerizing natural phenomena in winter are the crystal ice caves. The glistening blue ice walls are a natural wonder, carved by wind and glacial summer meltwater . Their brilliant appearances and mysterious locations are what make them so rare and attractive.

Winter in Reykjavik is filled with holiday joys, as the Christmas season approaches. Reykjavik city center hosts a Christmas market and an ice skating pond. The Christmas lights are lit everywhere, making the city so festive and cheerful.

Even when there are snow storms outside, the world’s northernmost capital is never short of entertainment. Many indoor experiences are available for you to get a taste of Reykjavik’s culture.

Spring and Fall in Reykjavik

Both Spring and Fall seasons are  short in Iceland - April to May and September to October, respectively. By the end of spring, it’s possible to get a quick glimpse of the Northern Lights, in the few hours of darkness when conditions are met, and at the tail of the fall, some ice caves may start to open.

In Iceland, The off season scenery and landscapes are always memorable. Streets in the capital city are decorated with flowers in Spring, and autumn foliage adorns the city with the charm of the fall.

Pros: Icelandic nature in peaceful surroundings. Cost of the stay.

Cons: Possible to miss the highlights of some amazing natural phenomena. 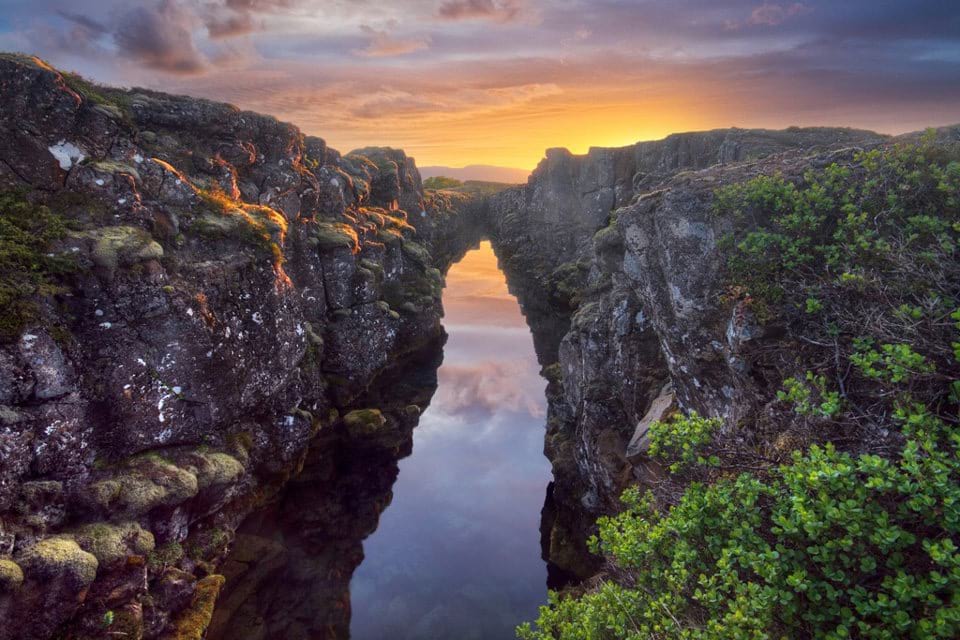 Travel via the Golden Circle Route to see the historic Thingvellir National Park.

Things to Do in Reykjavik

For locals and visitors, Reykjavik is the domestic hub for various fascinating entertainment and the starting point to experience numerous exciting adventures.

Within walking distance from downtown Reykjavik, , you can easily access venues like bars, clubs, live houses, and theaters. For a more laid-back experience, you can go for a Reykjavik walking tour or try a downtown food tour.

The Harpa Concert Hall performance schedule is constantly updated  and a variety of shows are available all year round. The Harpa building itself is one of the highlights in the city, as the hexagon glass facade reflects a whole spectrum of lights during the day, creating an intriguing atmosphere next to Reykjavik Harbor.

Many tours depart out of Reykjavik, the most popular being the Blue Lagoon, Golden Circle attractions, the South Coast of Iceland, and the erupting volcano. All amazing sights are only within a day’s reach. 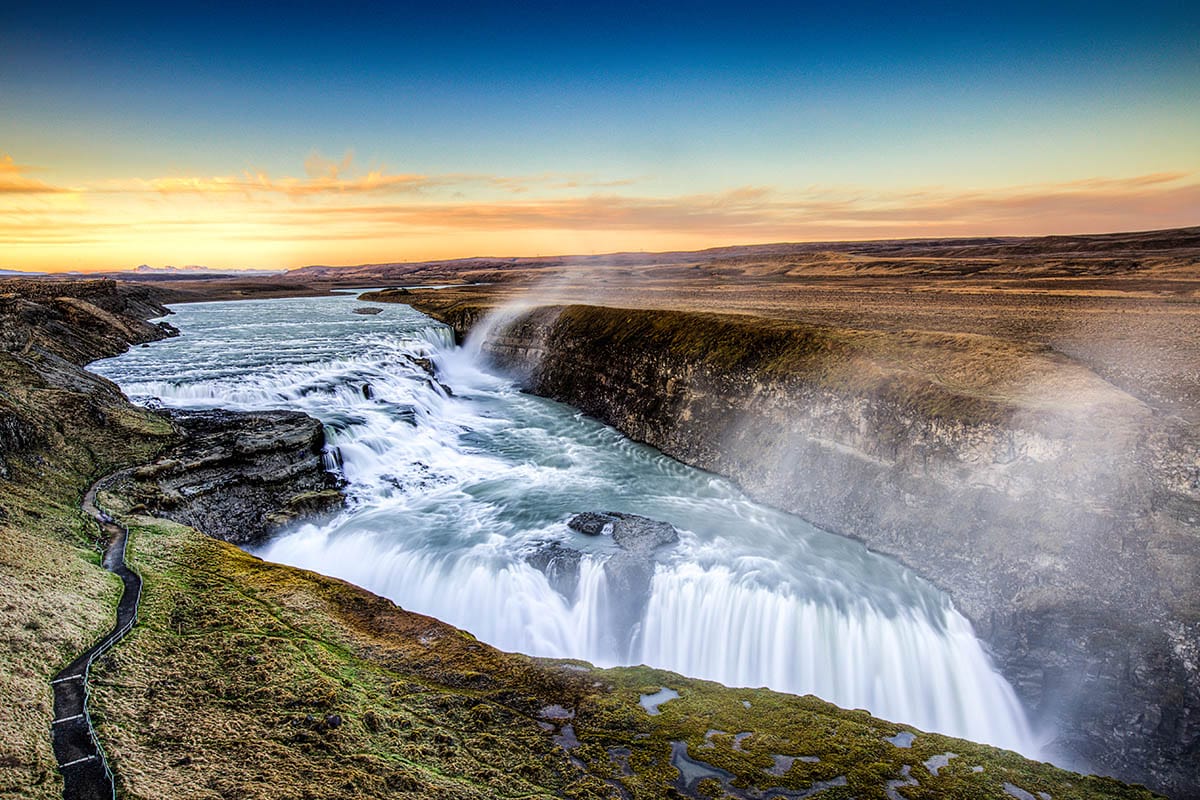 The Gullfoss waterfall is one of the three main attractions along the Golden Circle Route, close to Reykjavik.

As a thriving harbor metropolis, Reykjavik’s vibrant city sphere and diverse culture have attracted many admirers over the years, with rising awareness to embrace diversity and inclusion. In 2011, it joined the list to become the fifth UNESCO City of Literature and it is also one of the safest places in the world to visit!

Distance to the Keflavik International Airport: 50 kilometers (31.07 miles), about 47 minutes to drive via Route 41.

The first permanent settlers: Ingólfur Arnarson and his wife and brother, founded Reykjavik in 874 A.D.