As one of Iceland’s most popular driving routes, the Golden Circle Tour gives visitors the best opportunity to see a side of Iceland that is simply breath-taking and covering the essential natural sights in the country. The Golden Circle spans a distance of about 300 km. It starts in the Icelandic capital of Reykjavik and continues on to the east, before turning in a loop and ending back in the city.

The Golden Circle tour has three prominent destinations; the Geysir Geothermal Area, Þingvellir National Park, and Gullfoss Waterfall. Although each location is within the Golden Circle, they couldn’t be more different from one another.

There are 3 main attractions to see on the Golden Circle. It is best to not rush the adventure, and enjoy your time at the key locations. Some of the must-see places include:

The beautiful Thingvellir National Park is a green oasis, nestled within a rift valley. Only about 40km away from the capital of Reykjavik, it is filled with lakes, grassy slopes and a variety of hiking trails. The park is one of only three world heritage sites in Iceland. Along with its natural beauty, it is also a place of historical importance, as it is the site of the world’s first parliament. Photography enthusiasts will find a lot to enjoy here and it is important that you make sure that you pack your camera. 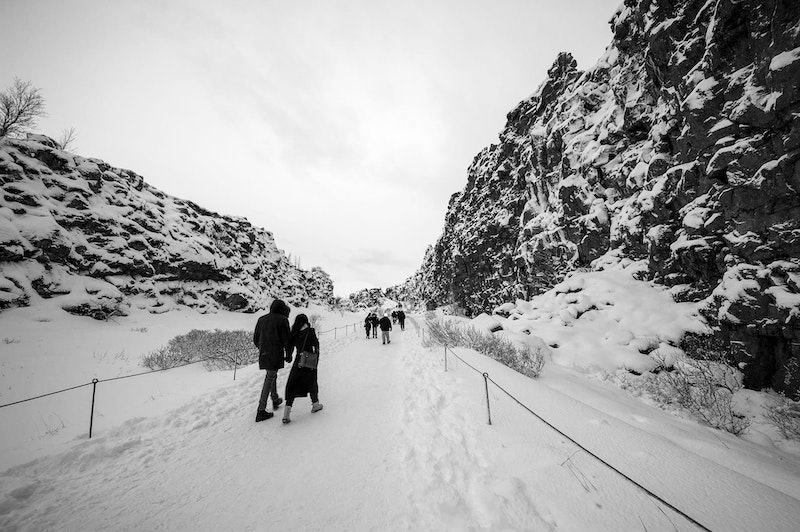 Iceland has become well known for the northern lights as well as its magnificent natural geysers. Haukadalur is the place to see some of Iceland’s most amazing geysers. The two most prominent geysers are the Strokkur and the Geysir, from which the modern word “geyser” is derived. Of the two geysers, Strokkur erupts every 5 to 10 minutes without fail. Geysir erupts less frequently but it is the bigger of the two. Around and close to the geysers are hot springs, fumaroles and mud pools. 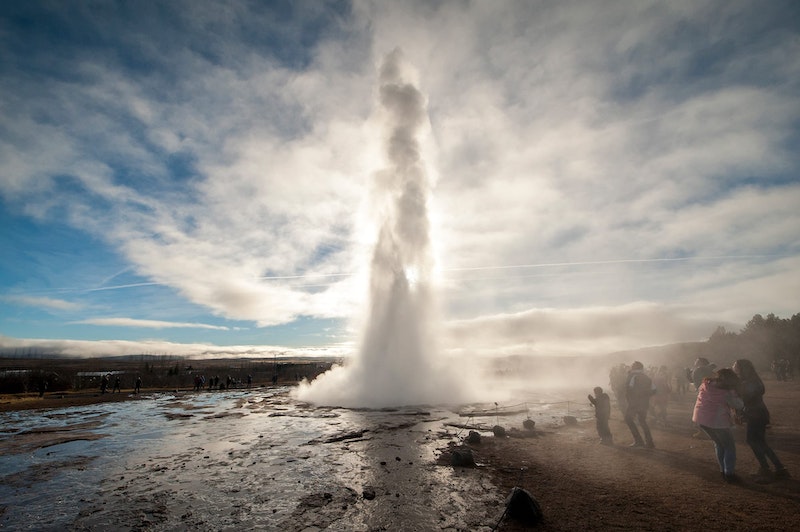 The Gullfoss Waterfall is a magnificent sight that will leave you standing dead in your tracks. It is one of the most unique waterfalls in the world, as it is viewed from above rather than from below as is the norm with most waterfalls. Travellers can gaze down at the cascades from a viewpoint at the top of a ravine. It is also a great place to go hiking with many of the trails taking you to the best viewing areas. When travelling here you can easily spend a couple of hours exploring the area. While the waterfall can be viewed all year round, some of the viewpoints might be closed at certain times of the year due to snowfall or ice. 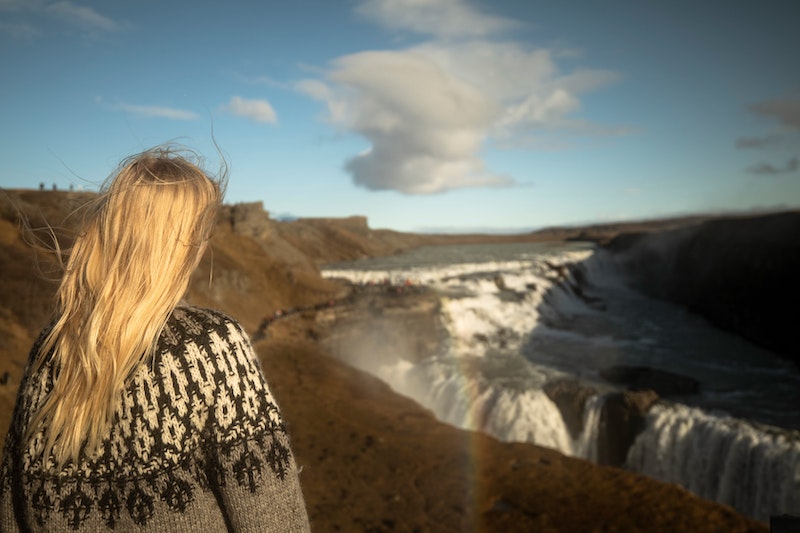 This is our secret bonus stop on all our Golden Circle Tours, and we could not write a blog about the Golden Circle without mentioning it. Kerid, or Kerið in Icelandic, is a volcanic crater lake located on the Golden Circle route. It’s caldera, the large cauldron-like hollow, is especially famous for its red coloured volcanic rock, steep walls and deep green moss covered ground. The lake inside is also particularly notable for its bright aquamarine coloured waters, due to the minerals from the soil. Many Icelanders hold a special place in their heart for Kerid, and the internationally famous musician Björk once performed a concert from the middle of the lake. It’s easy to walk around and explore, and is really an essential part of any Golden Circle tour. 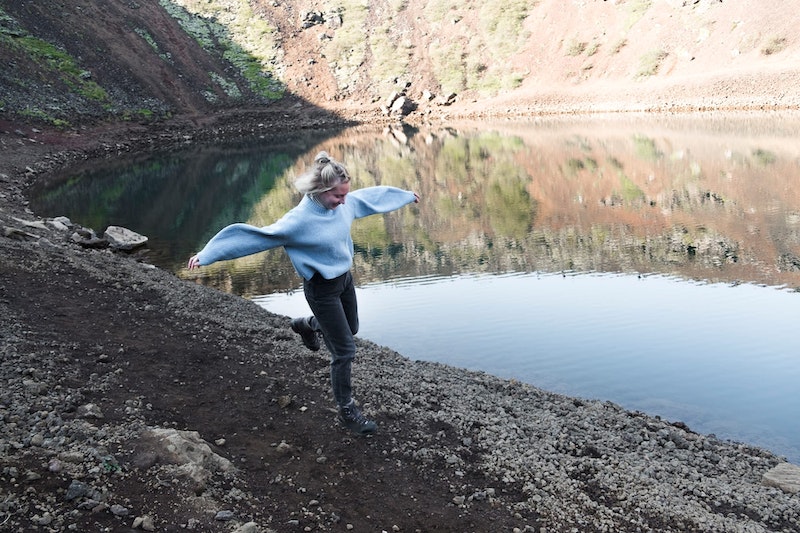 There are a few more interesting locations close to the route of the famous Golden circle - like Skálholt cathedral and Hveragerði town. You can read more about them in the Bookmundi travel guide.

You can explore all the best attractions that Iceland has to offer when you join us for a once in a lifetime Golden Circle tour. The Reykjavik Grapevine joined our Small Group Golden Circle tour for a fun day out and reviewed it very positively. Our tours leave from Reykjavik and include a whole day of travelling, with an extra special stop at Kerið volcano crater! While you could embark on a self-drive adventure, a guided tour is often the better option as it allows you to sit back and relax while taking in all of the sights. In the company of a local guide who knows each location and its history, you can spend the day learning more than you would from any guide book. 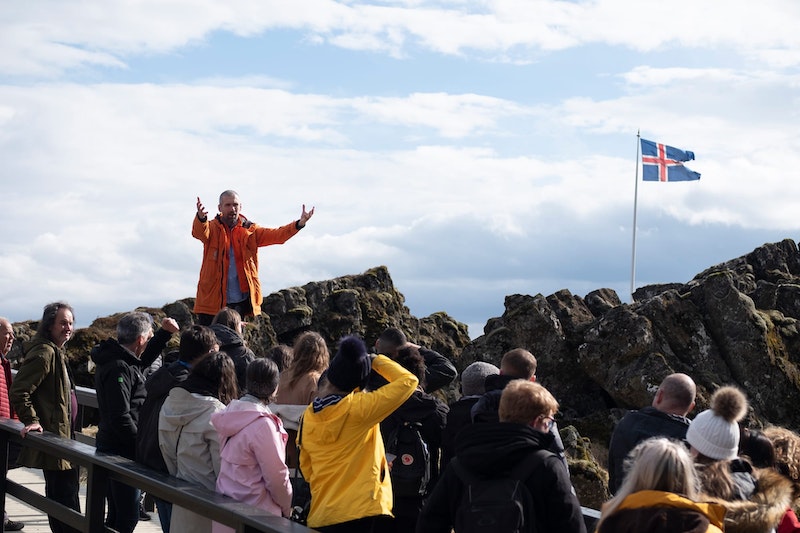