A grand day tour for all visitors to Iceland. See history and nature collide with the Thingvellir national park, the great Geysir, Gullfoss waterfall & Kerið crater.

We will combine all of the famous sights with a few extra stops to make your day as special as we possibly can, this means you will get to see Þingvellir national park, the geothermal wonders of Geysir and the golden waterfall Gullfoss. At BusTravel Iceland though our motto is “More nature, more fun” so we also make an additional stop at Kerið volcanic crater. You should expect a packed day full of adventure! 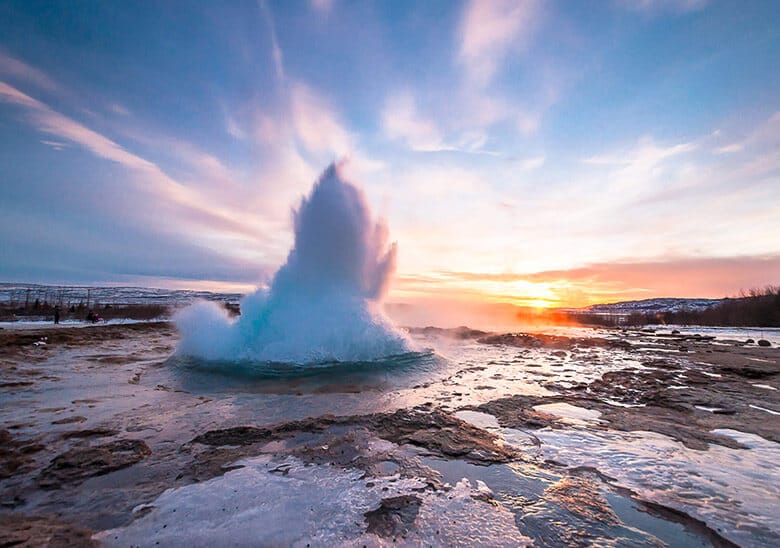 Gullfoss (Golden falls) is one of Icelands most majestic waterfalls. The waterfall originates in the Langjökull glacier and gets it's name from the gold hue it gives off as it tumbles downward into the canyon.

The waterfall drops down into a crevice of 32 meters (105 ft) in two steps being 11 meters and 21 meters each. On many occasions rainbows can be observed dancing across the top of this magnificent sight. Gullfoss has an interesting history that involves investors trying to harness its awesome power.

Þingvellir National Park (Thingvellir) is Icelands most historic site. This is where the worlds first parliament was established by the vikings in 930 AD. Thingvellir was designated as a world heritage site in 2004.

Þingvellir is also a natural treasure with it's vast lava fields and rivers leading into Icelands largest lake. The Þingvellir valley has been an inspiration for numerous painters and photographers alike.

Starting from the visitor center you walk out to the scenic deck known as Hakið where you can and witness the magnificent lava formation. You can almost witness the continental drift as you take a walk between the American and Eurasian tectonic plates.

As you walk down towards the valley you can read interesting tidbits about our history, viking era and how the laws of the land were established.

Kerið volcanic crater is a crater lake that became a focal point for tourist activity thanks to the breathtaking contrast of its blue waters and red lava rock surroundings.

It was once believed that Kerið was a volcanic crater created after a large explosion but study of the area showed no evidence of any explosions of the required magnitude had occurred here. Current theories state that Kerið was in fact itself a volcano that emptied its magma reserves and collapsed in on itself.

Pickup and drop off

What do I need to bring

Warm, water- and windproof clothing are always useful in Iceland.

All tickets are e-tickets so there is no need to print them out.

Please provide your personal details and information about your adventure.

Cards that we accept

Why book with us