In the Land of Ice and Fire, we have around 130 volcanic mountains within 32 volcanic systems. 18 of these volcanoes have erupted since the time of settlement of Iceland in around the year 871 AD. There’s one that's erupting even as we speak - it's the Fagradalsfjall Volcano Eruption in Reykjanes Peninsula. What's more exciting is that you can go visit and see it with your own eyes on a tour to the erupting Volcano in Fagradalsfjall. 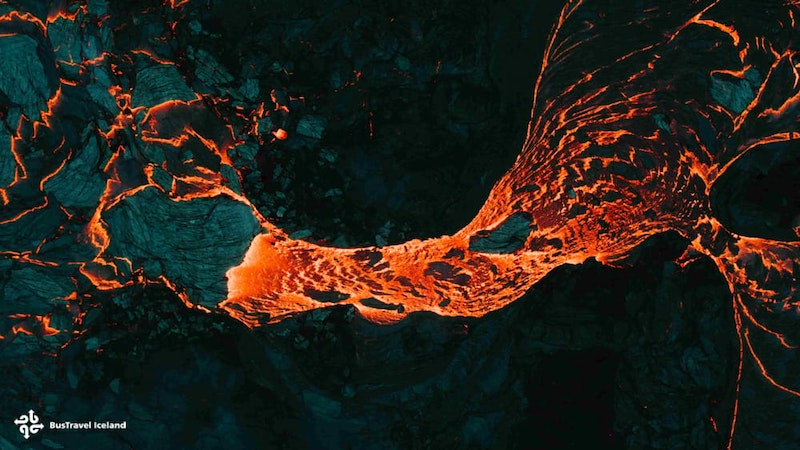 Folklore is a huge part of Icelandic culture, with many stories of trolls getting caught by the sun then turned to stone and tales of hidden people causing havoc to builders trying to construct roads in their special areas. There are many fables and legends around the volcanoes on this island, here are a few.

Lying beneath Mýrdalsjökull glacier, Katla is one of Iceland’s largest and most active volcanoes. She sits quite close to human settlements such as Vík, a popular stop along the south coast of Iceland. When she erupts, she heats up the glacier above her which causes pretty intense flooding. Usually, Katla erupts every 40-80 years but it has now been 100 years since the last time she sent clouds of ash into the sky. 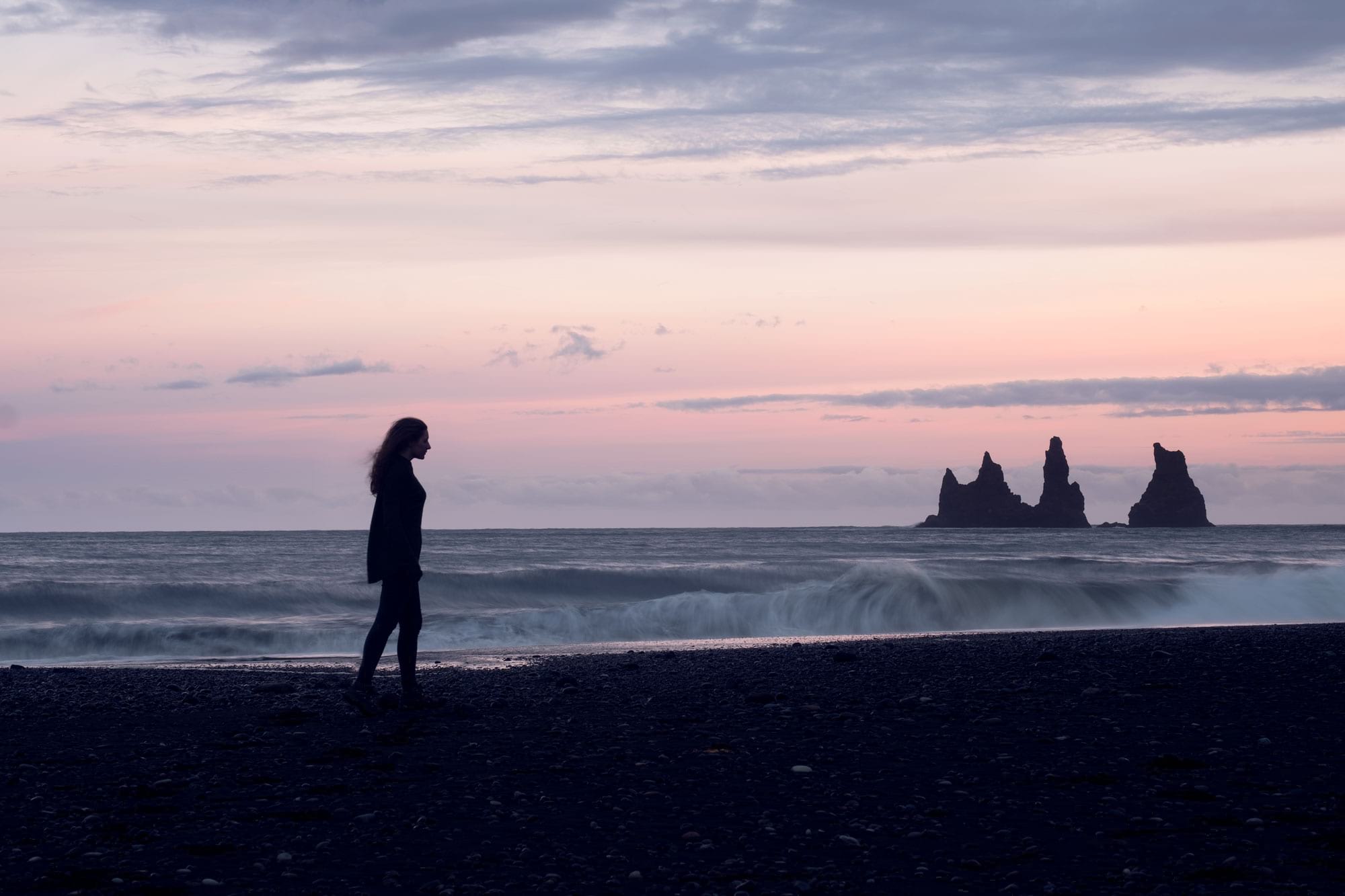 The legend of Katla was that she was a cruel sorceress who worked as a housekeeper at Þykkvabæjarklaustur monastery on the South Coast in the 12th century AD. She owned some magic pants that gave anyone who wore them the power to run quickly without getting tired.

Barði was a shepherd who got told off regularly by Katla whenever he couldn’t find their sheep, and was terrified of her as he knew of her powers. One night, a sheep was missing and Katla snarled at Barði, telling him to stay away from the monastery until he had found the roaming sheep. Fearing the rage of the sorceress, Barði had a clever idea. Katla was out attending a feast with the abbot that night so Barði snuck in and borrowed her magic pants to help him find the sheep quickly. His plan worked and he happily returned home with all the sheep, but Katla noticed immediately that he had been using her pants.

In a fit of rage, she drowned him in acid that they used for preserving food over the winter. When spring came, his body was discovered by the monks and Katla was asked to explain herself. Instead of facing punishment of her crime, she grabbed her magic pants and ran into the mountains. She hid in a magma chamber but soon after, the volcano started to erupt. They say that the magic pants caused this to be a much bigger eruption than usual and the glacial flooding headed straight for Þykkvabæjarklaustur monastery. The locals believed this was Katla getting her revenge for being asked to explain why she murdered the shepherd and named the volcano after her.

So, what’s the moral of this story? If you meet a cruel sorceress in Iceland, don’t borrow her underwear and don’t question her actions.

Hekla’s nickname is the Gateway to Hell. Since 1970, Hekla has erupted around every 10 years but her last show was in February 2000 so almost double the usual amount of time has passed since she last exploded. 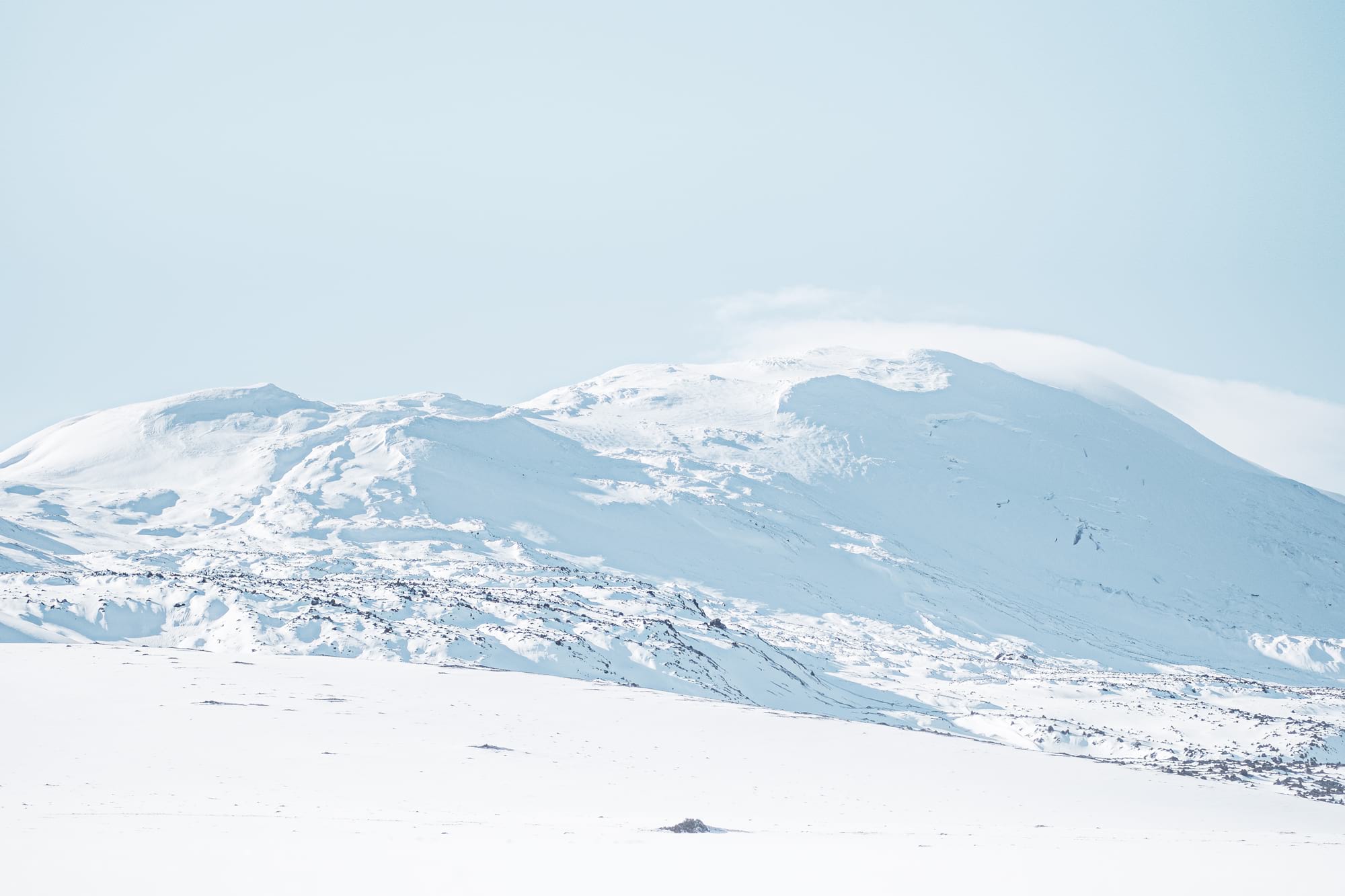 It was believed that on top of the volcano was the entrance to hell, and all over Europe clerks and bishops said that the volcanoes in Iceland (especially Hekla) were proof that Satan lived underneath us. Hekla remained unclimbed until the year 1750, mainly due to people being terrified of what they may discover up there. Surprisingly, the two first climbers did not find a passageway to the underworld when they summited Hekla, so today it is still a popular place to hike and even ski.

The name Hekla could have one of two meanings: the first is that it means a comb for linen. It is quite likely that her shape could have resembled a comb back when she was named but as many eruptions have happened since then, Hekla has changed shape and now looks like an upside-down boat. The other theory of Hekla’s name origin is that it means a cloak, referring to the cloak of mist that usually hovers around the volcano’s summit.

Snæfellsjökull is a glacier on the Snæfellsnes peninsula and under it lies a 700,000 year old stratovolcano. It hasn’t erupted since around 200 AD, but for a long time has been viewed as one of the world’s ancient power sites. Many people come here for retreats and to recharge their energy. 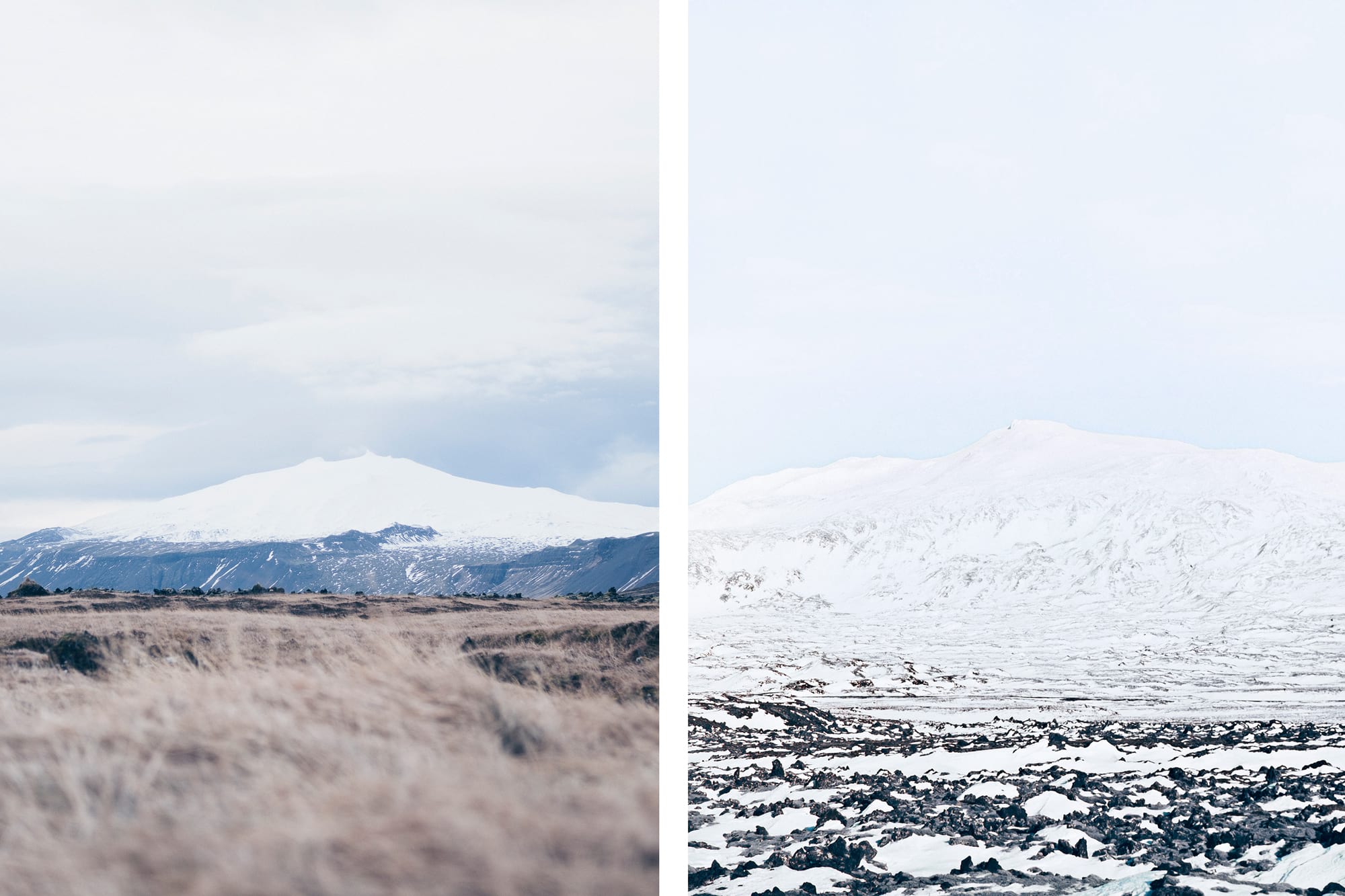 Bárður, a half man / half troll is the guardian spirit of the mountain. He decided to live in a cave in solitude up there after his nephews played an awful prank and pushed his daughter onto an iceberg which caused her to drift out to sea, lost forever. Sadly he never learned that she actually ended up in Greenland and found a husband there. Since Bárður moved into the mountain cave, the locals have regarded him as their saviour, requesting his guidance in hard times.

Snæfellsjökull is also well-known because of the popular novel Journey to The Centre of The Earth by Jules Verne. It is the location where the characters go down into the volcano that leads them to the Earth’s core.

Remember Eyjafjallajökull, the eruption that caused so much drama with airplanes in 2010? It’s a hard one to pronounce, but if you just say ‘I forgot my yoghurt’ really fast then you’ve basically got it down. 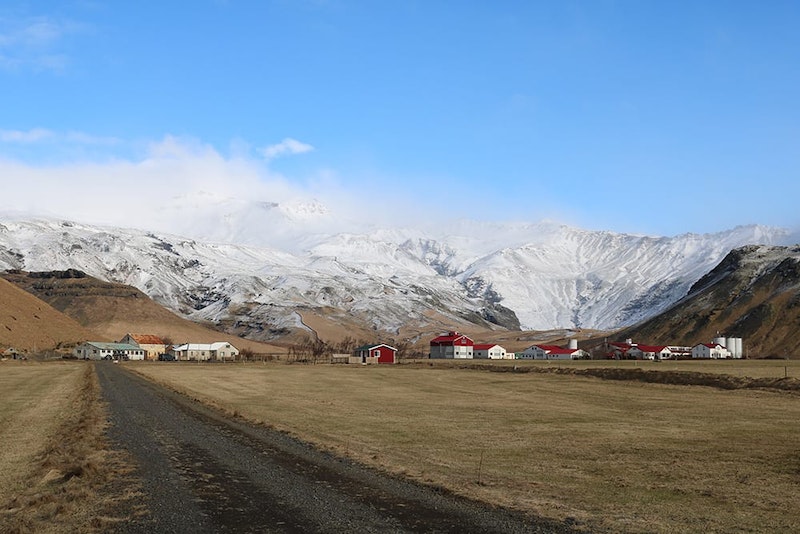 Despite Eyjafjallajökull only making a name for itself internationally in recent years, an infamous troll called Gilitrutt has lived there for centuries. One of the legends about her is that a young farmer married a girl hoping that she would help out with his farm. Unfortunately she was quite lazy and didn’t care much for farm work. In the autumn, he asked her to weave some wool into fabric by the following summer but she kept procrastinating until a rather large woman turned up to the farm one day. She asked this visitor to do the weaving for her and when she enquired about pricing, the huge woman replied that if the farmgirl could guess her name in 3 attempts when she returned with the fabric, then they’d call it even. She thought this was a pretty alright deal and the woman agreed to return on the first day of summer with the finished fabric.

After a while, the farmgirl realised it might not be that easy to guess the woman’s name with no clues so she admitted to her husband the deal that she’d made. The farmer exclaimed that this was no ordinary woman, it was a troll who would kidnap his wife and take her into Eyjafjallajökull volcano if she didn’t get her name right!

The farmer went for a hike up Eyjafjallajökull and luckily found the cave in which the troll was weaving and singing, “Heigh-heigh and ho-ho. Housewife doesn’t know. Heigh-heigh and hey-hey, Gilitrutt is my name.”

Instead of being a decent guy and telling the discovery to his wife, he decided to teach her a lesson about being lazy and let her get into a terrified state coming up to the first day of summer, wondering how on earth she’s going to guess the troll’s name. Not cool, man. On the big day as the housewife shook with fear, he finally decided to save her life and tell her the name. Gilitrutt the troll was so shocked when the housewife got her name right that she ran up to the snow-capped summit of Eyjafjallajökull and was never heard from again!

Okay so this one is not folklore, it’s a recent story that just had to be shared.

Vestmannaeyjar (The Westman Islands) are located just off the south coast of Iceland and can be seen from Seljalandsfoss waterfall on a clear day. The biggest island in the archipelago is Heimaey and had 5,273 inhabitants before the eruption. On January 23rd 1973 at 2am, the land parted and an eruption began with zero warning. 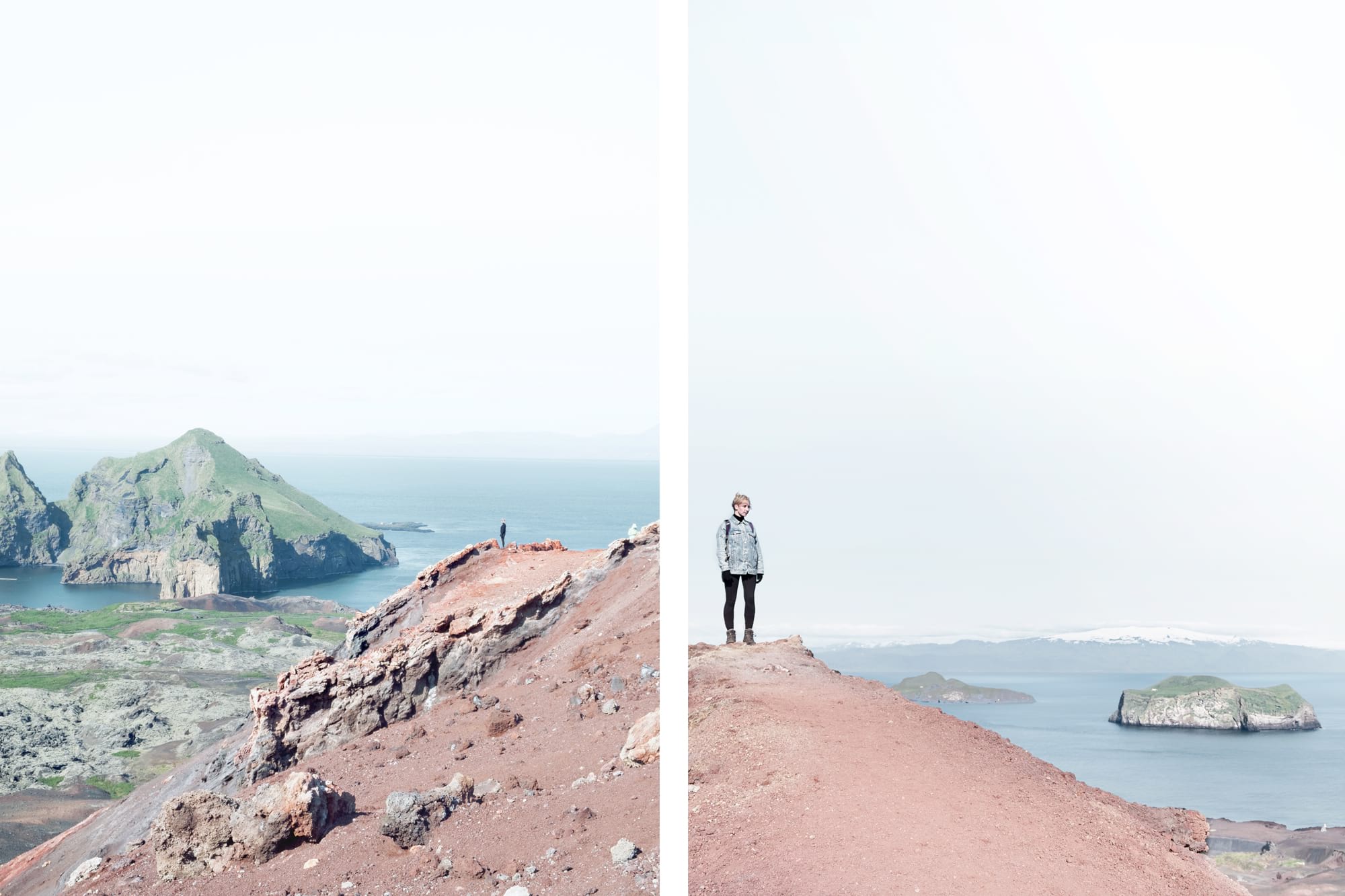 The fissure that opened up was 1.6km (1 mile) long and created a wall of fire, with 30-40 different craters. Lava spewed up to 600 metres into the air from the craters and lava bombs soared up to 2,500 metres above the ground. The wall of fire died down quite quickly but the centre of it kept erupting violently for a few days. Although the volume of lava coming out decreased quickly, the volcano continued to erupt until early July of 1973, making it a 5 month long eruption! Out of it came a new mountain, Eldfell, which reaches 200m above sea level and the flowing lava spread out into the sea, cooled and added 2.2 km2 (0.85 square miles) to the surface area of the island, increasing the island’s size by almost 20%.

When the inhabitants were evacuated by fishing boats, there was a brief moment of relief before the reality sunk in that their fishing harbour was in danger of being swallowed by the flowing lava. Heimaey’s primary source of income is their fishing industry and on the eve of the eruption 8.5% of the total fish catch of the whole of Iceland was brought into their harbour here, so to lose it would be devastating to them. Being an island bordered by sea-cliffs, this natural harbour becoming another sea-cliff would mean that accessing the island by boat would become extremely difficult.

So what could they do in the face of a mountain spilling out molten lava? They decided to fight back! Water solidifies molten lava and stops the flow so the emergency personnel that stayed behind pumped over 6 million cubic metres of seawater onto the hot flowing lava. They used 43 pumps and over 30km of pipes to achieve this. They also built walls and blocked streets to divert the lava flow.

This story, quite unlike a lot of Iceland’s folklore, has a happy ending where there were no casualties and the locals managed to save their harbour although most houses and businesses were destroyed. By the end of 1975, the population was back to about 85% of what it was before the eruption and the tephra that came from the eruption was used as material on the airport runway.

Today you can hike up the red mountain of Eldfell to see glorious views of Vestmannaeyjar and imagine what it must have been like to be a resident here when the eruptions took place.