Icelandic Yule Cat or Christmas Cat is a vicious frightening creature lurking around in the dark during a long Christmas night searching for something or someone to feast on.

Considering that Iceland has been rather isolated from mainland Europe since its settlement, a lot of Icelandic folklore is unique and reflects very hard life here in the old days. No wonder that even a light and joyful time like Christmas is connected to dark and scary stories and beliefs.

Just like the well-known Santa Clause lives on the North Pole together with elves and reindeers, all the sixteen most famous Yule characters share together a cave up in the mountains. The evil Icelandic Yule Cat lives together with an ugly child-eating troll Grýla, her lazy third husband Leppalúði and their 13 sons – Yule Lads.

The Yule Lads (sometimes called Christmas trolls or Icelandic santas) thankfully don‘t eat anyone and are even believed to bring small gifts for well-behaving children. However, they are big pranksters and thieves –  read more about them here. 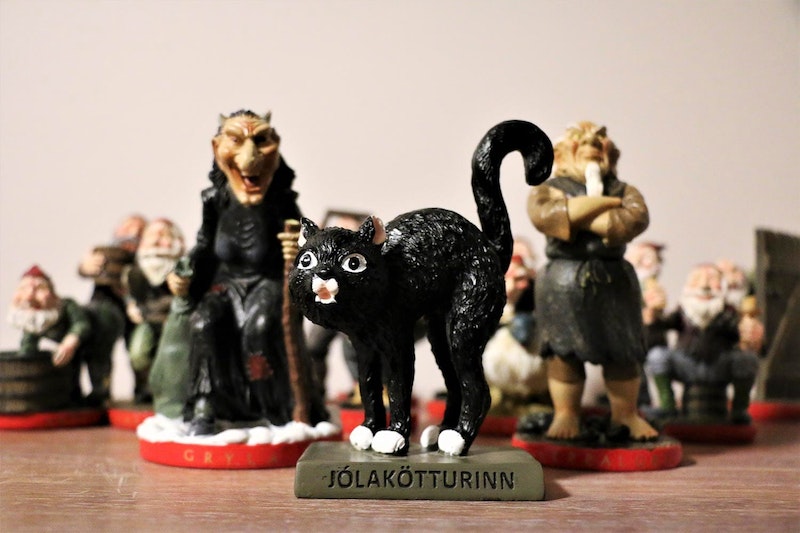 If someone is not familiar with Icelandic Christmas traditions, chances are high that hearing words Christmas Cat one will imagine something like that

But the evil Icelandic Christmas Cat is nothing close to being cute or little.

In stories it is described as huge and terrifying, with glowing wicked eyes, sharp whiskers and claws. It is definitely one of the most disturbing creatures Icelanders believed in. The Yule Cat comes down from the mountains during Christmas time to sneak around in the dark of winter nights and look for its prey. 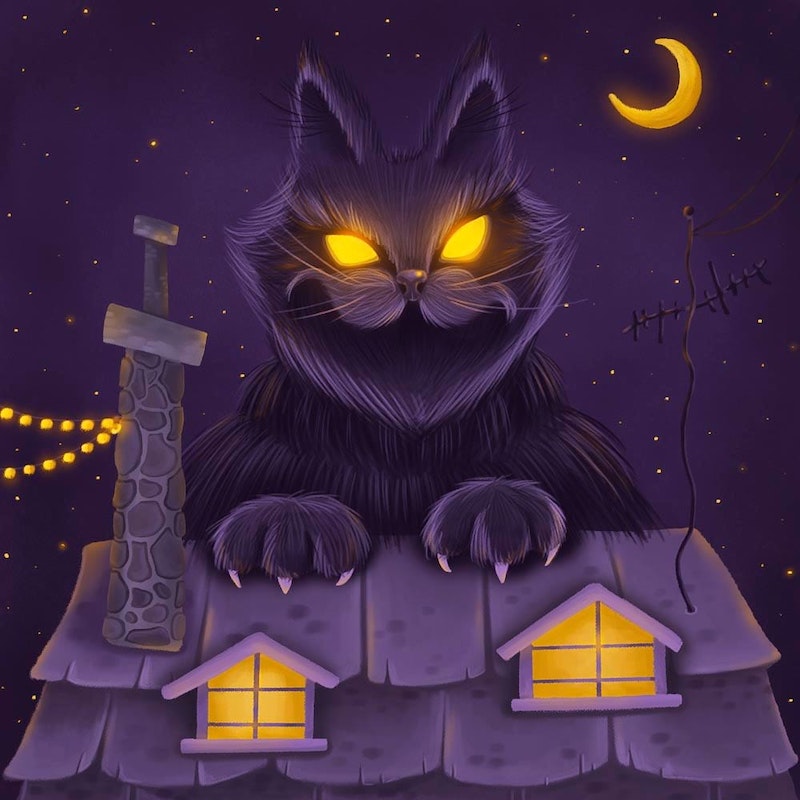 So who is it hunting for? Does it punish people for doing something bad? It would probably not be your first guess – but the Yule Cat pursuits those who didn‘t receive new clothes for Christmas! Haukur S. Magnússon in Reykyavík Grapevine calls it “a sort of proto-fashion police”

It sounds so wrong and unfair to punish even more the people who are very poor. And though it seems like there is no way to somehow justify this monster‘s reason, there is a theory that could explain it.

It is believed that the Yule Cat‘s legend was used as motivation for farm workers to finish processing the autumn wool before Christmas. When they finished tasks given to them, they would receive new clothes from the farm owners and therefore would be safe from the evil cat.

Most employers nowadays wouldn‘t approve of such a management style, but it must be effective!

What about little children in less fortunate families? The Yule Cat makes no exceptions – it is terribly hungry! So poor mothers were desperately knitting or sewing little garments for their kids before Christmas night, so that no one „goes to (into) the Christmas Cat“ (an old saying in Iceland).

It is ironic to think about many kids nowadays being unhappy with clothes as Christmas gifts, isn‘t it? They‘d often say grandma‘s socks, scarfs and sweaters are boring compared to toys. But in Icelandic stories you would literally die for those socks, or should I say – without them.

Another more recent and less blood-curdling story version is that the Yule Cat eats all Christmas food away from those without new garments. Still, it sounds very sad – no new clothes for poor people, and no food either!

How famous is the Christmas Cat?

"You all know the Yule Cat

And that Cat was huge indeed.

People didn't know where he came from

Or where he went." 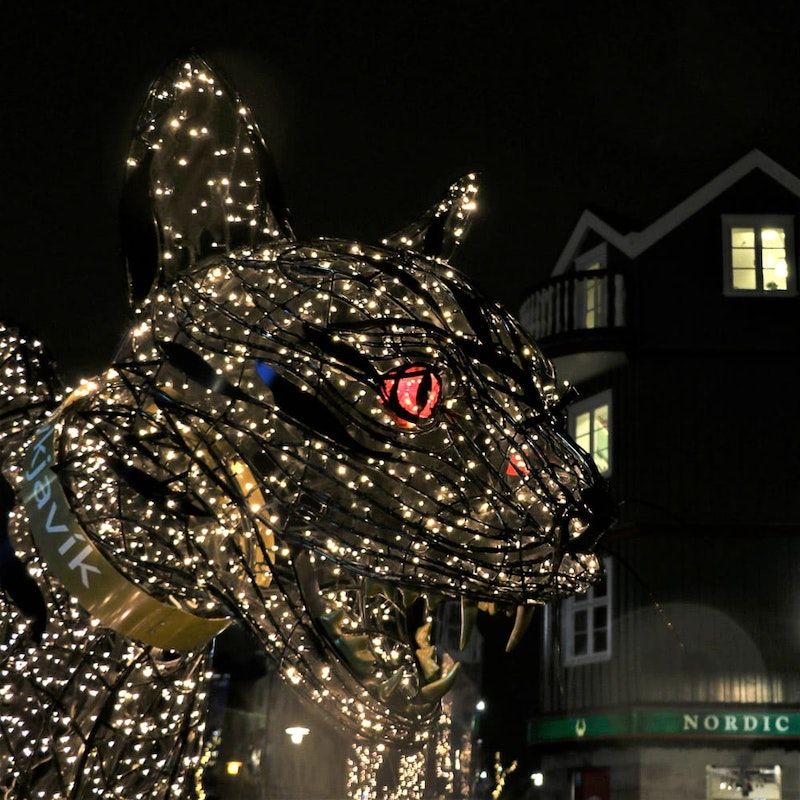 In Iceland Christmas Cat is familiar to everyone of course, a number of art works are devoted to it. But it is rather infamous than popular. The Yule Lads are in better regard – they put gifts in shoes after all!

Interestingly, the Yule Cat seems to wake more interest abroad than other Yule characters. Is it because it‘s story is so ridiculous and unbelievable? Or maybe it owes its fame to Björk – a famous Icelandic singer? You can listen to her song Jólaköttin (the Yule Cat) here.

The song is based on a poem by Jóhannes úr Kötlum – a beloved Icelandic poet. The poem takes inspiration from folk tales and was translated into English later by Vignir Jónsson.

Our expert guides help you experience the majestic Northern Lights