Puffins are probably the most popular birds in Iceland. They play a big role in Icelandic culture since the old days, as well as they interest travelers coming here each year.

Atlantic (or common) puffin is a rather small and very cute seabird inhabiting the North Atlantic region. For these puffins Iceland (especially Westman Islands) is the most common breeding place. 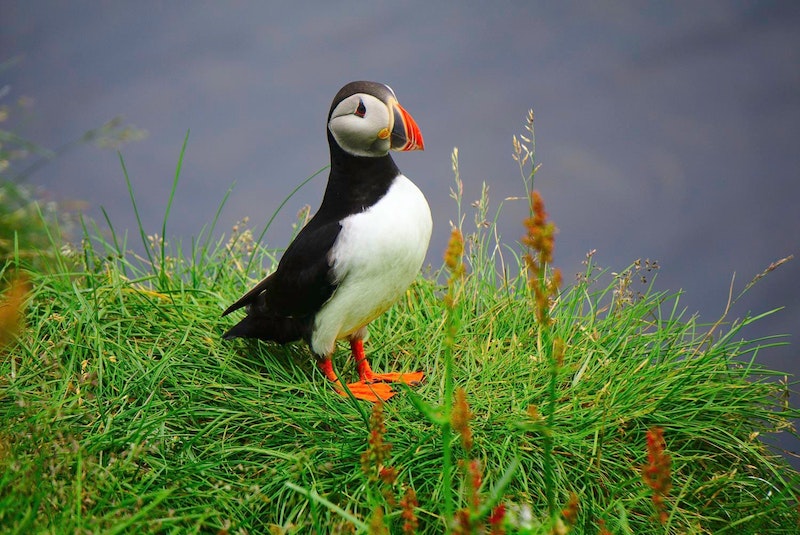 The name “puffin” originally referred to young fatty, salted, “puffed” puffin meat. The Icelandic name for puffins is Lundi, but the bird has many nicknames such as “little monk in the north” and “little brother in the north”.

Lundi is usually referring to the bird that has 60% of the entire universal population mating in Iceland, which is the Atlantic Puffin. Maybe that's why when people say the “Icelandic puffin” they mean the Atlantic one. 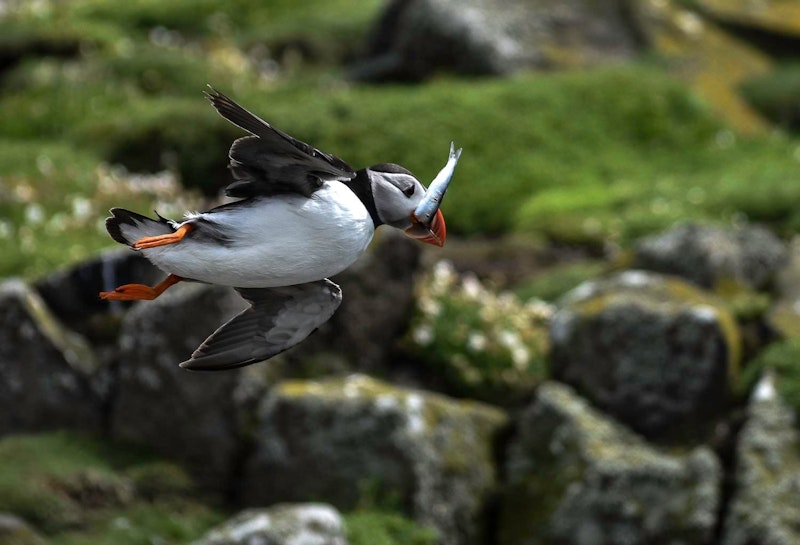 Puffins are quite adorable when it comes to mating. The average lifespan for puffins is 15 to 30 years and around the age of 3 to 5 puffins choose a partner and stick for life. That does not mean they are constantly together though. Puffins live alone for most of the year but reunite once a year during mating season. 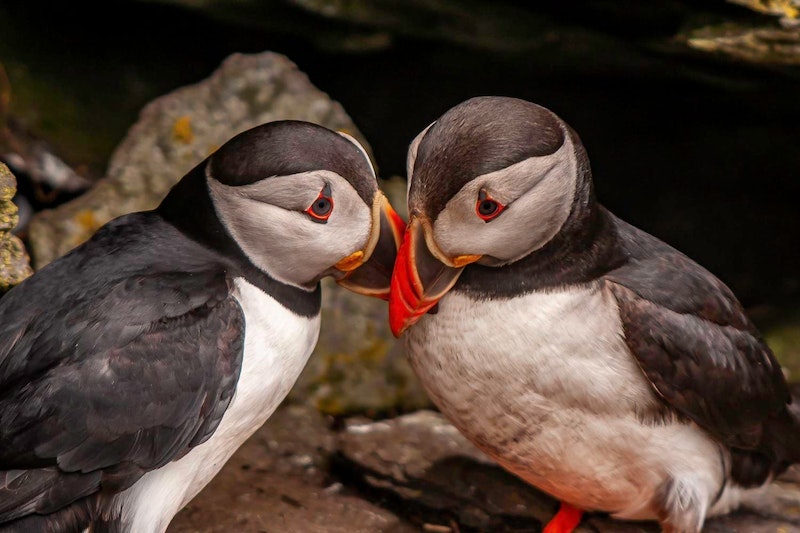 Puffins breed in large colonies usually on coastal cliffs or offshore islands and always go to the same burrow every year. Instead of making nests like most birds, puffins dig holes. These holes can be up to a meter deep and they occasionally use old rabbit holes.

Puffin beaks change color, in the winter they are muted and grey, and in summer their beaks become a vibrant orange. It is thought the color change in summer helps with finding a mate.

These Icelandic birds are very cute and understandably people want to see them in real life. Puffins in Iceland are mostly on the south coast but the largest puffin colony is in the Westman Islands. The birds in Iceland mate from May until July which is “puffin season”. It is easiest to see puffins during this time. 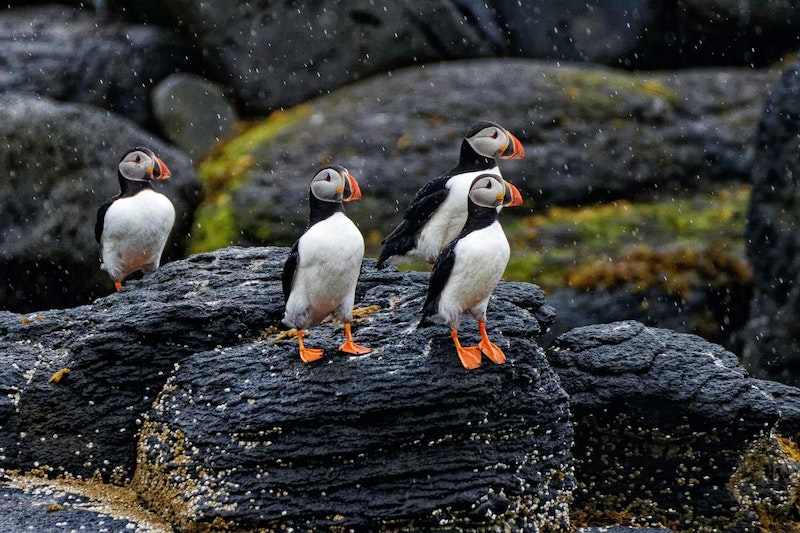 As I mentioned earlier, puffins aren’t great at flying and that especially applies to the babies, which are called pufflings (or “pysjur” in Icelandic). Pufflings spend their first moments on cliffsides and once they are ready for the real world they have one chance to fly to the ocean. It’s more like they jump from the cliffs to the ocean rather than fly. 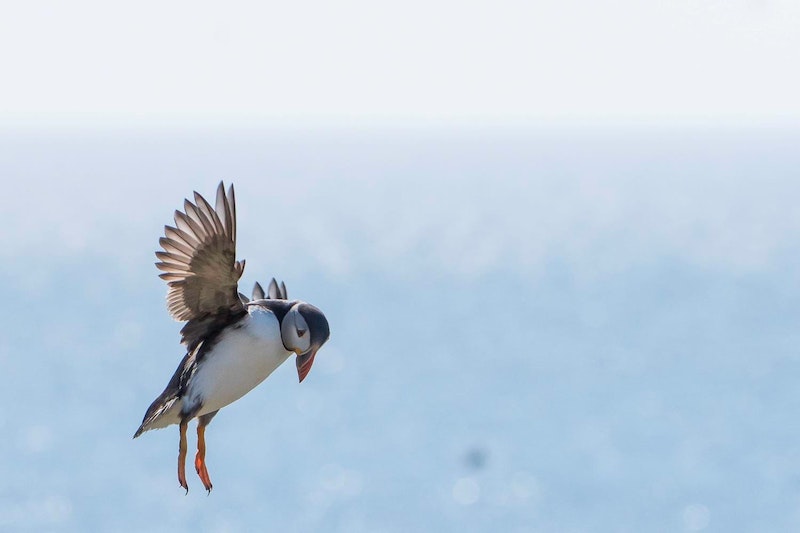 Once they are in the ocean they don’t come back to the cliffside until they’re 3-years old. Puffins' flying abilities develop slowly so if the pufflings don’t make it to the ocean on their first try they’re basically doomed because they can’t fly.

There is a very wholesome tradition in the Westman Islands where people rescue pufflings during puffin season. Unsuccessful pufflings land all around even on city streets and in people’s gardens.

People rescue the pufflings and take them to a cliffside where they throw the puffling into the air so they can have a second chance of flying to the ocean. This tradition runs deep in the Westman Islands and families gather together to do this every year.

Puffins are a part of old traditional Icelandic cuisine and are eaten fresh or smoked. These species are thankfully not endangered but the population is dwindling. There has been discussion to ban puffin hunting but it has not yet been done.

Puffins are quite small birds, only about 20 cm in height, so you don’t get a lot of meat from one bird. It is more like a tradition for locals and an exotic delicacy for the tourists. 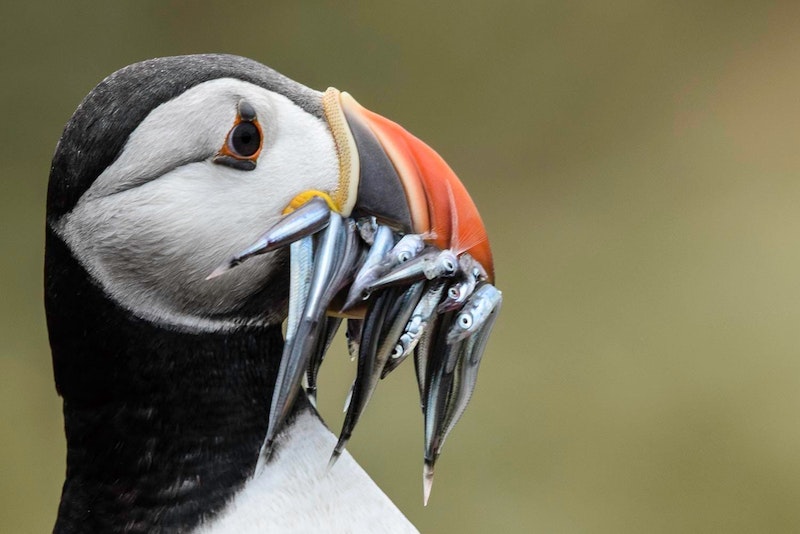 Visit the puffin colony to get an extra-close look at these adorable birds.

Horses & Puffins - an amazing way to spend your day in Reykjavík!

Whale Watching in Faxaflói Bay with Special Tours - We Go the Extra Mile!