Icelandic Christmas tradition stands out a great deal from surrounding Europe and North America. And no wonder – it features 13 Yule Lads, their troll mother Grýla, father Leppalúði, and the Yule Cat.

That‘s a little competition to the well-known Norse mythology pantheon, right? While one might think that 13 Icelandic Santa Clauses, their mom, dad, and a Christmas Cat sound fun and innocent, it is not exactly the case.

Let‘s see why not 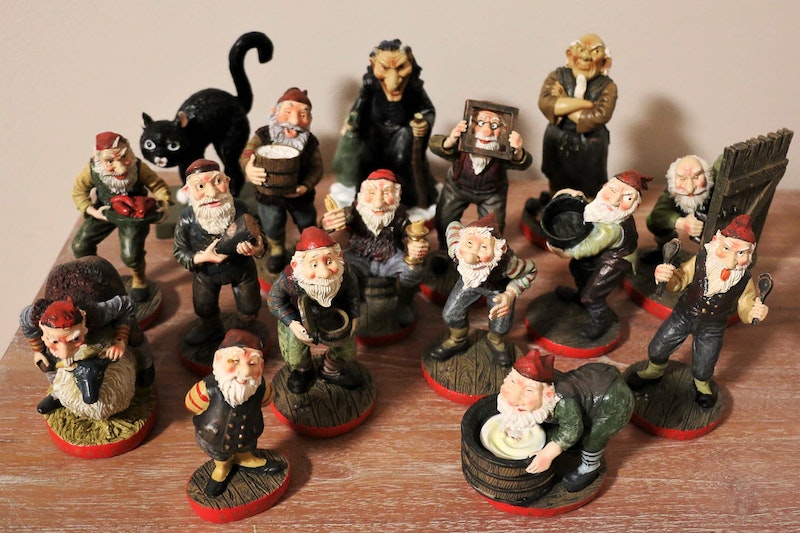 When Christmas is approaching, children in many countries of the world will write their most desired wishes to a jolly white-bearded fellow. But there will be no letters addressed to the North Pole from Iceland, and it‘s not even really that far! Instead, starting from the evening on December 11th kids here will carefully put their shoes on a window seal, trying to remember whether they were behaving well that day.

13 nights before Christmas Yule Lads (Christmas trolls) come from the mountains, one by one. They sneak into windows and leave little surprises in shoes for children. For those who behaved well, they leave a little toy or candy, but those who were naughty get a rotten potato or onion instead (ew!)

But that‘s not it! Icelandic Yule Lads are thieves and pranksters by their nature, each one infamous for his own mischiefs. Their names speak for themselves and are quite descriptive. 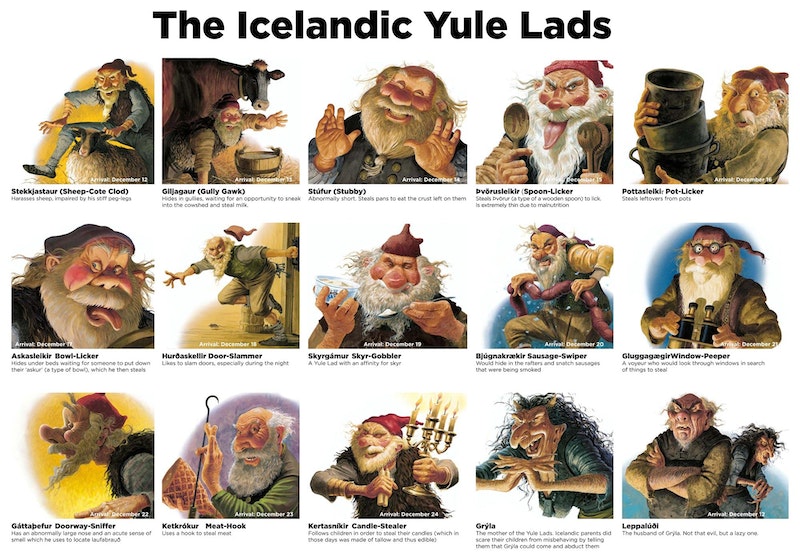 Here they are in the order that they arrive:

December 12th. Stekkjarstaur (Sheep-Cote Clod*). Loves fresh milk, so he steals it straight from the sheep. He is also peg-legged and stiff, so one can hear squeaking and cracking noise from him. If Stekkjastaur is not careful around sheep, he will get a hoof in his face!

December 13th. Giljagaur (Gully Gawk). Sneaking and hiding in a gully, he is waiting for cows to be milked. He then slinks into a cattle shed to steal froth from fresh milk.

December 14th. Stúfur (Stubby). Is much shorter than the others (bet Leppalúði didn‘t dare to ask Grýla why). He has a taste for the crust left on unwashed pans.

December 15th. Þvörusleikir (Spoon-Licker). Steals spoons to lick them. But there isn't much food left on them, so he is believed to be very scrawny.

December 16th. Pottaskefill (Pot-Scraper). Scraps food remains from pots. At least he leaves the pots behind!

December 17th. Askasleikir (Bowl-Licker). No food went to waste in the old days, so when people were done eating, they would put their bowls on the floor to let dogs lick them clean. And there was Askasleikir hiding under a bed, waiting for it. He would then snatch a bowl from a dog and lick it himself. (Yack! I can‘t even decide which part of it is grosser!)

December 18th. Hurðaskellir (Door-Slammer). This one is more of a prankster than a thief. He slams doors loudly, often late at night, so he can wake everyone in the house up.

December 19th. Skyrgámur (Skyr-Gobbler). Just loves skyr (Icelandic traditional dairy product). He would eat all that he found or steal it.

December 20th. Bjúgnakrækir (Sausage-Swiper). Sausages were hung down from the ceiling rafters and smoked. Bjúgnakrækir hides there, fishes them and eats.

December 21th. Gluggagægir (Window-Peeper). Peeks into windows looking for something to steal (not creepy at all!)

December 22th. Gáttaþefur (Doorway-Sniffer). With his sharp sense of smell he can find laufabrauð (leaf bread – Icelandic traditional Christmas pastry) from far far away. Of course he has to be with an unusually large nose!

December 23th. Ketkrókur (Meat-Hook). Steals meat gripping it with a hook. (Would be cool if he actually had a hook for a hand, but that‘s more of a pirate thing I guess.)

December 24th. Kertasníkir (Candle-Stealer). Creeps, following children as they go to bed and steals their candles. But not for the light – he then eats them! Since they were made from animal fat in the old days (mmm.. delicious!)

Do you think Icelandic Santas are not scary enough for tough Icelandic kids? Just hold on! 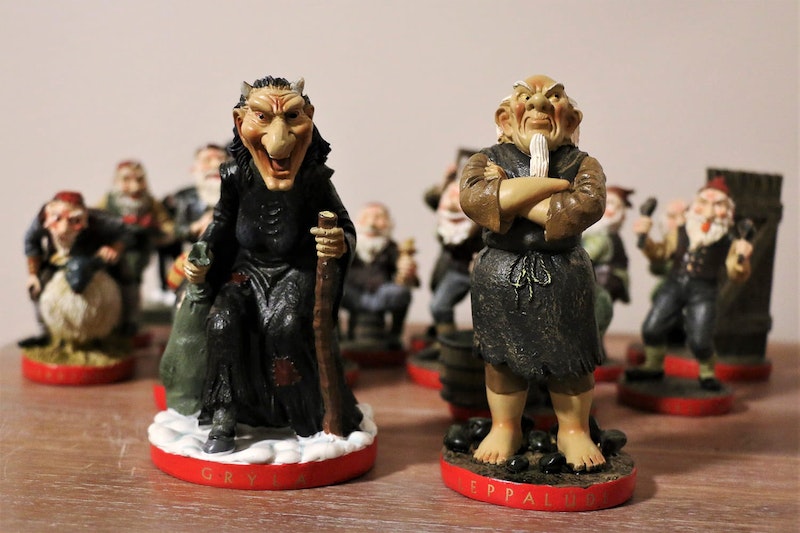 It gets really scary when we start talking about Grýla. Stolen food and rotten vegetables in shoes are peanuts compared to what she does.

Each year before Christmas she grabs her huge sack, comes down from the mountains and collects ingredients for her festive meal. Can you guess what it is? A stew made of misbehaving children, naturally! And unlike Yule Lads she doesn‘t just look at the last day, she knows how kids behaved through the whole year. That‘s a long time to be considered, so there is said to be no shortage of Christmas food for Grýla.

"Well, enough stories for today, good night children and merry Christmas!" - just imagine telling these tales to your little ones.

Good news that at least Leppalúði is not so dangerous. While he isn‘t exactly a pleasant person either (and what can you expect from Grýla‘s third husband?), he is just too lazy to go out and do any harm. 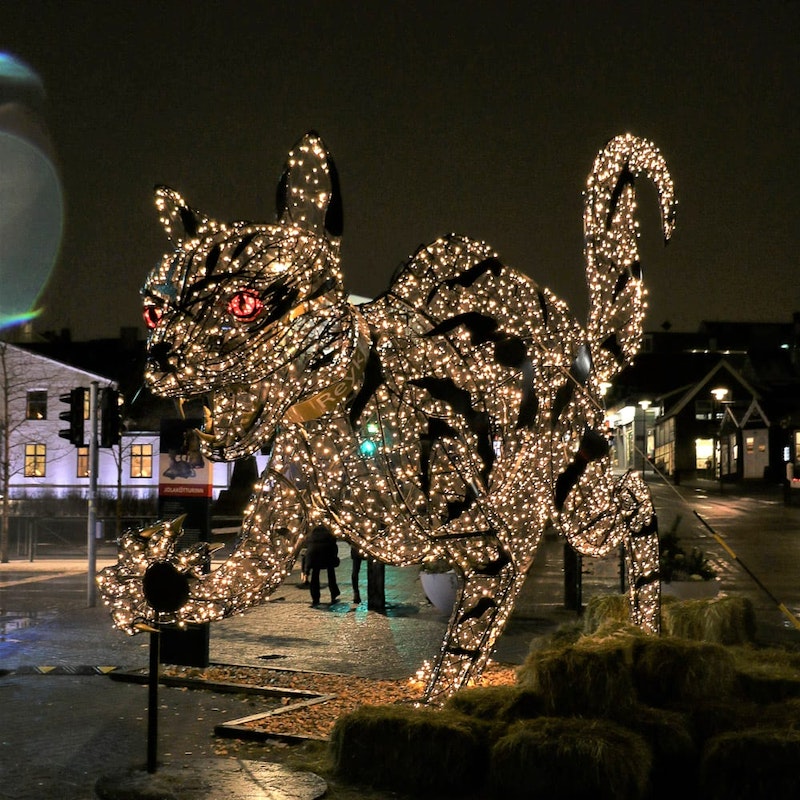 And last, but not least is the Christmas Cat.

Yule Cat is a perfect and very fitting pet for this delightful family. In comparison to trolls a cat might seem harmless, but believe me – it is not. In fact, it is a large and terrifying flesh-eating monster, who hunts and eats people who didn‘t get new clothes for Christmas!

It is safe to say that Yule Cat is the worst of them all. Think about it, Grýla does also feast on people, but at least you have a choice to behave well or repent for things you‘ve done and be released. With the Christmas Cat, you just hope that someone gives you at least new socks or mittens. Otherwise, you are officially cat food, Christmas cat food to be precise. Where is justice in that?

Read more about the Yule Cat

*English names of Yule Lads are from Hallberg Hallmundsson's translation of the poem “The Yuletide Lads”.